The Chinese are travelling abroad in bigger numbers than ever to celebrate their coming New Year, with daily international departures 11% up on a comparable period last year, according to latest figures from ForwardKeys.

Based on forward bookings, it reveals that a significant number of Chinese tourists are heading for destinations in South East Asia, which will experience an additional uplift because the Chinese are avoiding South Korea, owing to a diplomatic rift following the deployment of THAAD missiles there.

The ForwardKeys’ findings show that Chinese travellers are also making an early start from the beginning of their winter break at the end of January, with figures already significantly ahead.

Current bookings show that travellers will begin to peak from February 10 to February 14, ahead of the Chinese New Year (February 16) and the following Golden Week holiday.

Globally, Asia-Pacific is the top destination region. It has a market share of 76%, ahead 13%. But other parts of the world – The Americas, Europe and Africa & the Middle East, are showing steady, healthy growth, as the Chinese become increasingly attracted to international travel. 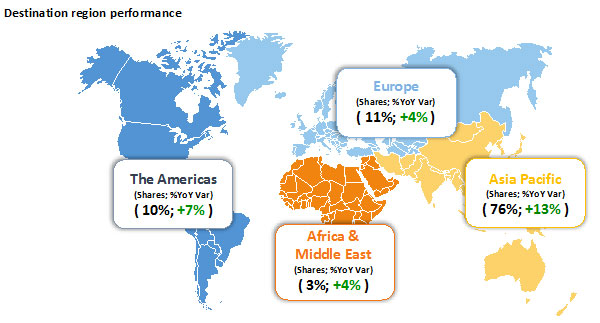 Japan, Thailand and Taiwan hold their positions as the top three destination countries. New Zealand tops the list of the fastest growing destinations – ahead 30% on last year, followed by Vietnam, ahead 22.5%, and Hong Kong, ahead 18.3%.

The pattern for Chinese people heading home after the celebrations tracks last year’s movement – peaking on February 21 at the end of Golden Week.

Two airports in Japan see the greatest increase in returning numbers – Sapporo, ahead 40%, and Osaka, ahead 39%.

They are followed by Phuket, Thailand, ahead 34%. Significantly, Dubai (DXB), also ahead 34%, is seeing more Chinese visitors than ever.

Chicago tops the list of those airports benefiting from Chinese homeward bound transfers.

"It means that businesses have an excellent opportunity to provide services and goods to a growing Chinese clientele that is increasingly demanding and affluent.

"Purchases made en route play a big part in Chinese activity when travelling, which is why our latest figures will be of particular interest to global and duty-free retailers.”